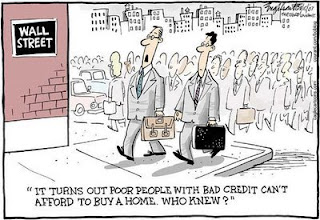 Several commentators have recently praised Treasury Secretary Tim Geithner’s plan to use Wall Street firms to help value “toxic” assets, such as mortgage-backed securities (MBS) and collateralized debt obligations (CDOs), because it draws on these firms’ supposed expertise in valuing securities. For example, Richard Posner, on the Becker-Posner Blog, had this to say about the plan:

Although my guess is that the political factor is the major driver of Gaithner’s [sic] complex plan, the plan does have other advantages, so that on balance, despite
its higher transaction costs and likely longer delay in implementation, it may
conceivably be the superior approach quite apart from the political imperative.
It will simplify the banks’ balance sheets by removing assets of uncertain value
and replacing them with cash, and it will draw on private-sector expertise in
valuing assets and in negotiating transactions. The government could of course
hire a Wall Street firm to advise it on the purchase of assets from banks, but
both the carrot of profit and the stick of competition are likely to be stronger
motivators to efficient transacting, and this argues for making private firms
buyers rather than just advisers. [Note that this entry, posted by Posner on or about March 29, 2009, appears to have since been removed]

As an initial matter, the reason that these assets are being referred to as “toxic” is not because they “infect” other assets on banks’ balance sheets per se, but because they are so difficult to value that they cause uncertainty and financial paralysis. Yet, as I commented on the Posner post, the solution is not as simple as simply bringing in Wall Street banks or hedge funds to help value the securities, for several reasons.

First, it is not at all clear that these Wall Street players know how to properly conduct due diligence and re-underwrite the underlying mortgage loans to determine how many are likely to pay out and how many are likely to default. This is an extremely time-consuming and non-scientific process, and one that these same firms were manipulating during the housing boom (often under the cover of third-party due diligence firms) to make the securities appear less risky to investors. Who’s to say they’ve now learned how to properly value MBS and will do so in an entirely unbiased manner, especially when they would benefit as buyers from undervaluing these assets?

Second, whether or not the underlying mortgage loans will perform is highly contingent on the current legal and political battle over loan modifications. The most efficient solution to the valuation problem from a bondholder perspective would be to quickly foreclose on all defaulted loans, liquidate these assets, and move forward with only performing mortgages remaining in the securitization structure. However, there is immense political pressure in the current environment to help delinquent borrowers stay in their homes by performing loan modifications. As I’ve discussed in previous posts, Countrywide has settled lawsuits by dozens of state Attorneys General by agreeing to modify 400,000 loans by, for example, lowering monthly payments or interest rates. But because many of these loans have been securitized, Countrywide no longer owns them and acts only as servicer, and any reduction in monthly payments would be borne by the ultimate bondholders. Some bondholders have challenged the Countrywide settlement, alleging that it constitutes improper loss-shifting and violates the securitization agreements. Now, the U.S. House of Representatives has passed, and the Senate is considering, a Servicer Safe Harbor, which proposes to allow servicers such as Countrywide to ignore such contractual obligations (and even gives them a $1000 cash incentive for each loan they modify!). The outcome of this pending litigation and legislation will have a considerable impact on the value of these “toxic” assets, and presents additional uncertainty preventing their accurate valuation, by Wall Street or anyone else.