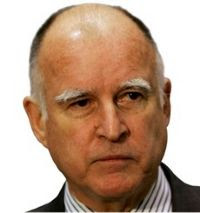 On October 6, California Attorney General Jerry Brown (pictured at left) announced that Bank of America, parent of Countrywide Financial Corp., had agreed to pay $8.68 billion to modify the home loans of over 400,000 homeowners in a negotiated settlement of the lawsuits filed by Attorneys General in 11 different states (previously discussed here, here and here). Brown hailed the agreement, thought to be the largest predatory lending settlement in U.S. history, as direct relief for homeowners damaged by Countrywide’s manipulative practices. “Countrywide’s lending practices turned the American dream into a nightmare for tens of thousands of families by putting them into loans they couldn’t understand and ultimately couldn’t afford,” Brown said (see LegalNewsline stories on the settlement and the reaction).

This settlement, which provides for the suspension of foreclosures for eligible borrowers with subprime and pay-option adjustable rate loans and a waiver of $135 million in various fees and penalties, certainly constitutes a step in the right direction towards bringing accountability to one of the lenders that fueled this crisis. Yet, Brown took this apparent victory for homeowners a step further by directly contrasting the deal with the recent Federal bailout. “Unlike last week’s congressional bailout, this loan modification program provides real relief for borrowers at risk of losing their homes,” Brown said. “Tragically, California and the other states have had to step in because federal authorities shamelessly failed to even minimally regulate mortgage lending.”

Though somewhat self-serving, Brown’s criticism of the government bailout is largely valid. Though the legislation pays lip service to homeowner relief, the bulk of the $700 billion authorized by Congress will be handed over to distressed banks in return for the mortgages and mortgage-backed securities they had a hand in creating. Few would argue that, indeed, the bailout bill has as its main purpose the stabilization of the financial markets and the prevention of further bank failures, rather than the support of homeowners struggling to make their mortgage payments (putting aside for the moment those who fraudulently obtained mortgages and have likely stopped making their payments months ago). Nor has this shortcoming been lost on those clamoring for voter support. Perhaps taking a page from Brown’s book, Barack Obama announced today that he would propose a 90-day moratorium on foreclosures for some homeowners as part of a plan to boost the economy and aid middle-income taxpayers. While again a positive step, what would this nation’s Founders have said if they knew the government they framed would end up stepping in to aid banks and financial markets before addressing the welfare of its citizens?